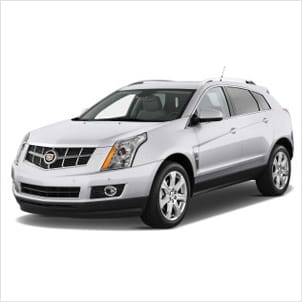 Want a crossover that’s truly built tough? The SRX uses tough steel for its sculpted body. It’s silhouette causes the SRX Crossover to stand alone in the crossover class. Get the sophisticated SRX Crossover and experience a new level of greatness. The exterior lighting on the SRX is energy-efficient. The vertical LED tail lamps react faster than traditional bulbs. In the rear, the available power lift gate with memory height helps you with easy reach.

You can have power, style, and technology in the SRX. With intuitive technology features, such as the Bose sound system, USB connectivity, Bluetooth, and the available glide-up-touch-screen with GPS-based navigation system, driving the SRX Crossover you’re continually getting spoiled. Enjoy every minute of it. Think that’s all? There’s even more. The programmable Driver Information Center assists you in your driving needs, and does so in style, with the full-color screen.

An advantage to driving a crossover is it’s extra space. In the Cadillac SRX Crossover, you’ll find that plenty of room is always available. The rear seats fold down, making sure you don’t have to unpack anything from your trip down the roadway. And, as the Cadillac way, luxury is never left behind. The interior features Fresh stitching, chrome accents, and available Sapele wood trim.

Want a crossover with power? You’ve come to the right place. The 2012 SRX Crossover has 308 horspower and a direct-injection V6 engine. That’s right, you’ll get the most powerful engine standard in any luxury crossover when you get the Cadillac SRX. But don’t think you’ll have to work extra to pay for the gas to power this crossover, it’s fuel efficient and eager to take care of you. Auto-dry brakes are available for your SRX. Working with RainSense wipers, when the wipers are activated, the brake pads are positioned closer to the rotor, sweeping moisture away, and improving the performance of the brakes. Also available on the SRX is a computer-controlled real-time damping suspension and a torque-vectoring All-Wheel Drive system. With unstoppable performance and captivating looks, the 2012 Cadillac SRX Crossover has everything to offer, leaving your fellow drivers in the dust.